The WC-Co (Carbide) is the generic name for certain metal that is combined with a tungsten carbide (WC) and a cobalt (Co) which is a binder and sinters at a high temperature and produced. 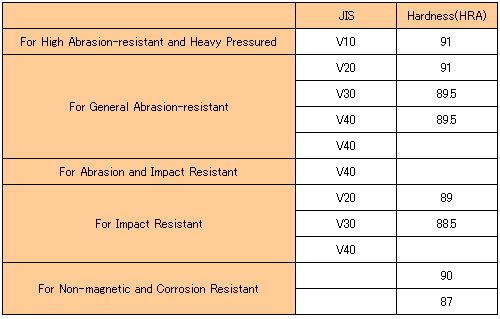 It can be changed a characteristic by adding Ni or the Cr, and the materials manufacturer develops various types of WC-Co (Carbide).

The WC-Co (Carbide) without Co is also developed.

The WC-Co (Carbide) is mainly used as materials of a field required the abrasion resistance and the impact resistance characteristics such as a cutting tool or the die. We would choose any type of WC-Co (carbide) depending on the specifications of the customer.

The History of WC-Co (Carbide)

2.About the Tungsten Carbide Heading Dies

The emeritus professor at Osaka University Kozo Osakada stated as follows.
“The WC-Co (Carbide) was developed as the materials for the drawing dies. It is not clear that when is the beginning age to use the WC-Co (Carbide) to the cold forging, but it is thought that it was used from very begining (about the year 1940) of developping the cold forging in Germany.
The tungsten carbide tool was known in Japan, but the dies steel (SKD11) was the majority in the 1960s. After the 1980s, it came to often use the high-speed steel (HSS) and the WC-Co (Carbide). The precision of the cold forging product comes to have much use of the WC-Co (Carbide) for the purpose of the product precision improvement recently to be influenced by the elastic deformation of the tool greatly “
Above tendency is remarkable in the cold heading process, and there comes to a certain assessment that the WC-Co (carbide) is absolutely indispensable.

Among the heading dies producing in us, we would explain the three typical structure of dies and the manufacturing method of them.

The Heading Dies for Micro parts 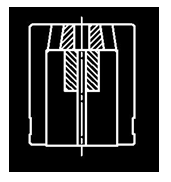 In addition, we would be able to plan cost reduction by making the structure that can change only the portion of the WC-Co (Carbide) where wearing out.

We call the assembled dies that comprised of such a plural materials in us. What kind of die structure we take is the capability that is tested asr the die manufacturer is tested.

As for the Integral custructioned shape with the pin and the folder, the stress is concentrated at the root of the pin. Then the die might be disrupted on that area. The tungsten carbide two-piece punch is suitable for mass production of stainless hexalobular shape head screw which could prevent very strong stress to the dies. Because the hexalobular shape head, not like plus or minus shape, is very difficult to form due to unique shape of hexalobular. And it would exercise its performance for mass production of such a complexed shape as a result. In general the HSS all-in-one punch is used for that production, but the life-time of the dies goes short. On the other hand the life-time of the tungsten carbide two-piece punch would be 15 times to 30 times than HSS one and even if a pin is worn, you will be able to sharpen it again and reuse it.

When there is gap between a pin and the folder at the time of header processing, the burr might come out to a product. In order to solve that problem, after having produced pins, we measure the shape of pin by the 3D measuring device and produce folders based on the data. Because we would be able to suppress the gap to around several μm, any burr do not occur.

The Punch for Bimetal Rivet Contacts

The WC-Co (Carbide) Punch and Pin

The Dies for TAPTITE 2000® products