What’s about the Cold Heading Process?

Summary of the Cold Heading Process

The cold heading process is processing to form various kinds of metal only by pressure in normal temperature. Even it is said, “cold”, but does not make a low temperature state
In general, the customers use the machine called the header and the former. It is used for manufacturing of screw, bolt, pin, rivet and various component etc..

When cutting a wire rod in a machine, thewi punch and the heading dies would be using to process it automatically while squeezing and extending it by force. It is often said for its kind of header “Two Three”, or “Two Dies Three Blow (2D3B),it means “the style of the machine which can be processed by two heading dies and three punches”

Our heading dies and punches for micro parts are commonly used for the dies which are called “2D3B” or “double header” processing parts with one heading dies and two punches.
On the method of “double header”, usually the WC-Co (Carbide) is used for the heading dies and the first punch (the preliminary smash punch) and the HSS dies is used for the second punch (the finishing smash punch) for the processing of screw head.
Although the HSS dies is inexpensive, however, comparering with the WC-Co (Carbide), it is weak for the impact resistance and shorter life-time.
The usage of the WC-Co (Carbide) two-piece punch is increasing because of redeeming above weakness of the HSS dies.
Since the maximum cutoff diameter of wire rod and the length is limited depending on the operating processer, it is required to select the appropriate processing machine.
Although there is a limitation of manufacturable products by “double header” and “2D3B” in some degree, it would be possible to realize some difficult processing by using best the ingenuity even though small number of dies and punches 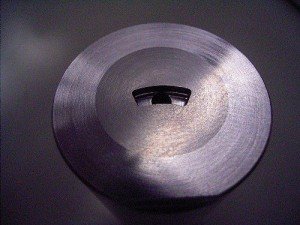 We cannot readily see it, but the high-performance parts such as automotive etc. are mass-produced at low cost now in the cold heading processing. We do not usually produce dies of the large-sized former, but are supplying the finishing dies for the high-performance components by utilizing the heteromorphic and deep hole processing technology.

There is a limit listed below on the last of the demerit, but the use range of the cold heading process opens by a technological development including a die.

Click each photograph, and then it can be zoomed up.

Merits of the Cold Heading Process

Demerits of the Cold heading Process

The Punch for Bimetal Rivet Contacts 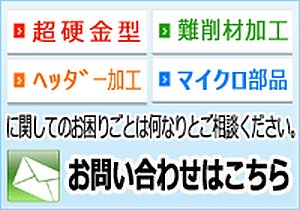